By Pat Rothblatt in Anniversary Reflections on November 1, 2019.

Disaster is most visible at the margins. As climate change accelerates, Puerto Rico functions as a harbinger of what’s to come, much like it and the rest of the Caribbean have throughout modern history.

For me the indelible images of Maria are San Juan Mayor Cruz speaking in front of pallets of canned beans while Trump tweeted about NFL players, the junk food FEMA was distributing to survivors, endless video of the chef Jose Andres cooking and delivering meals, Trump tossing paper towels, and a VR Mark Zuckerberg high fiving while touring the destruction virtually.

Hurricane Harvey a month earlier in Houston had its flooded, choppy highways. Irma in Miami a week and a half earlier turned the roads around the condos in downtown Miami into rivers and caused cranes to collapse.

When Hurricane Maria hit Puerto Rico on September 20, 2017 as a Category 4 it was still recovering from Hurricane Irma which passed less than 100 miles to the north as a Category 5 two weeks earlier. After Nate hit Mississippi in October, 2017 would be the first time since 2005 that four hurricanes made U.S. landfall in one hurricane season.

My mom grew up in South Florida, in her lifetime there was a major hurricane every generation, or about every 25 to 30 years. Donna hit in 1960. Andrew hit in 1992. But the 2004 and 2005 seasons seemed like the first indications of a new normal. Storms hit one after another. Then a decade of calm until 12 years later when Irma hit Miami in 2017.

In September Bloomberg wrote about a woman living in the Florida Keys two years after Hurricane Irma in very similar circumstances to those in post-Maria Puerto Rico. In it they note, “By the end of the century, 13 million Americans will need to move just because of rising sea levels, at a cost of $1 million each.” Survivors in Florida’s panhandle are also struggling a year after Michael in 2018 became the first Category 5 to make U.S. landfall since Andrew in 1992, the fourth on record. This year Category 5 Dorian would come very close to hitting Florida from the Atlantic side.

In 2005, four days before Hurricane Katrina hit the Gulf Coast as a monster Category 5 storm, it crossed South Florida as a Category 1. The destruction was mild, knocking out power to large parts of South Florida.

Six Florida summer days without air conditioning is miserable. But when everyone is going through it, it doesn’t seem so bad. There are a lot of BBQs. Hurricane season is about the only time Floridians come together as neighbors.

In 2004, when a record four major hurricanes hit the state, FEMA gave out vouchers for generators, so many Floridians were prepared for Katrina. Low-wattage needs were taken care of: food in refrigerators stayed fresh, lights turned on, you could turn on your TV to watch the news. Generators buzzed around the neighborhood as residents watched Katrina hit New Orleans.

Two months later Wilma hit and it was a different story. The destruction was far worse. Supplies were already short from Katrina, so hours-long lines were the norm. Whether you got supplies after waiting in line was pure chance. Thankfully, Wilma was followed by a cold front so you could open the windows and sleep in comfort for a few days. For three long weeks the streetlights on my block were dark. Cable and internet didn’t work.

Our homeowners insurance from USAA gave us a check for $16,000 and said that though they were no longer writing new policies, we were grandfathered in. It was the first time my mom had ever had to file a windstorm claim since buying her first home in the ‘70s. Shortly after all the national insurers pulled out of the state.

Fourteen years later, in September 2019, I find myself helping my father-in-law look for condo insurance. As Dorian hovered over the Bahamas, GEICO told me they weren’t writing policies until the storm passed. When the storm finally did pass, GEICO said none of its partners would be writing new policies.

Citizens was established as the insurer of last resort when the insurance market collapsed after Hurricane Andrew in 1992. Its rates are expensive and coverage is paltry. It’s now the largest insurer in the state and often the only option.

A recent study says, “thousands of Florida homes — valued at a combined $3.38 billion — were built in zones at risk for inundation by 2050, only 30 years from now…which is about the amount of time that’s on a mortgage if you bought a house today.”

Spencer Glendon, of the Woods Hole Research Center says, “No one should be lending for 30 years in most of Florida. During that time frame, insurance will disappear and terminal values — future resale income — will shrink. I tell my parents that it’s fine to rent in Florida, but it’s insane to own or to lend.” A report covering this story noted, “Insurability is the main issue. Thirty-year mortgages come with the condition that a borrower have insurance, which is renewed annually. But insurers can choose to stop offering insurance at any time, or make prices prohibitively expensive, which would cause a homeowner to violate their debt. Eventually, lenders would be forced to stop lending, causing prices to plummet.”

The list to the left doesn’t include 2019 which had Dorian and Lorenzo, a rare extratropical hurricane that hit Ireland and the U.K. That made a record fourth year in a row the Atlantic had one Category 5. And only the fifth year on record with more than one.

Climate change is accelerating and the disaster is heading towards the middle. 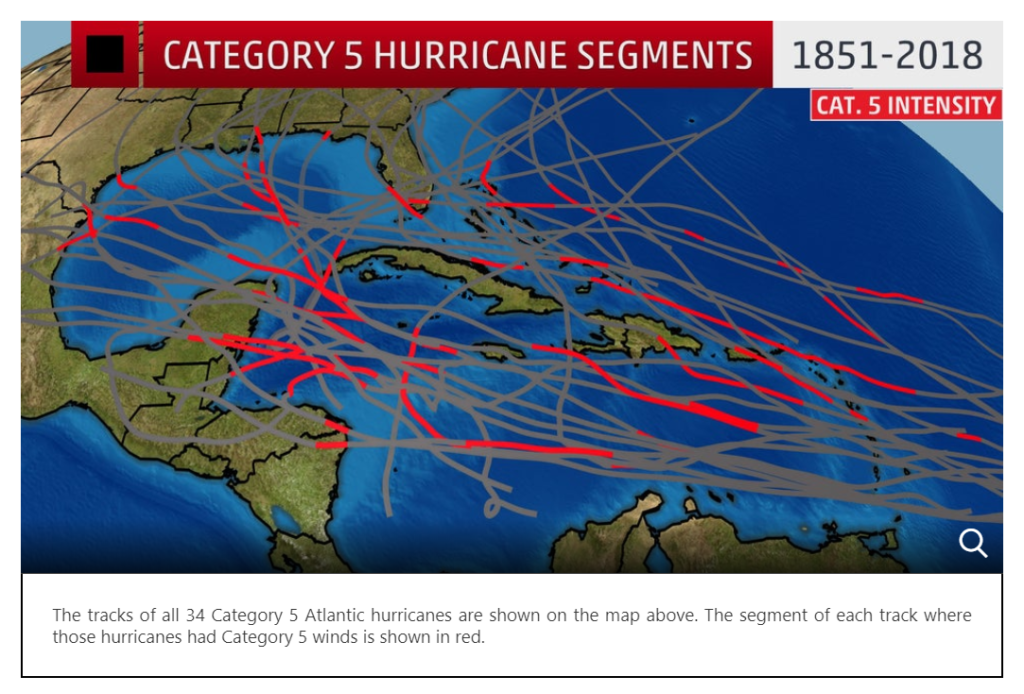