U.S Spreading Hate Since 1898: An Endless Cycle of Oppression

In 1898, The Americans invaded Puerto Rico for their natural resources, mainly sugar and promised Puerto Ricans that under their rule the Americans will protect their life, liberty, and happiness. The Americans won the Spanish-American war with the help of Puerto Ricans, who were under the assumption that they will receive the “American Dream” as presented like such in the Treaty of Paris.

With that said, Puerto Ricans started to attack Spanish owned businesses and property, but low and behold tigers never change their stripes, the United States manipulated and colonized Puerto Rico extorting them for all their natural resources until the island of Puerto Rico ran into debt. Shortly after the United States established their presence, gearing up to complete their mission to take over Puerto Rico’s economy, the citizens of the island started to question where they stood with the United States being that the U.S did not include Puerto Rico within the country. Instead, the U.S made Puerto Rico a U.S territory. Being a U.S territory and not a state means that you generally have a territorial governor appointed by the Federal government. You usually do not have any elected body of representatives and have no representation in Congress.

I try to picture this as if I were at a restaurant and I kept ordering different types of food on the menu, but everything I taste is just not good enough for me, so I keep wanting more which leads me to ordering more.

The end of the night has come, the beautiful restaurant is closing down and as the waitress is bringing me the check, I run and then try to sue later on for harassment! This would be me showing a lack of respect and humbleness being that I walked in intending on not paying, but yet in the back of my mind felt no guilt because I hold no regard for the business being that I ate everything they had to offer but did not think of them enough to be fair and pay for what I ate.

The U.S runs out on the bill every time it pertains to a minority group. The U.S holds no regard or remorse for manipulating and extorting Puerto Rico throughout the years. The United States literally extracted Puerto Rico’s sugar and oil while making huge contributions to the islands standing debt, but when citizenship that was promised by the U.S to the people of Puerto Rico was not fulfilled, this eventually lead to the Jones Act of 1917. The Jones Act was a way to naturalize Puerto Ricans through a process that would eventually lead them to citizen status however, that does not change territorial status, so was this act just beating a dead horse? But it would not be in the U.S fashion to just do things solely because it is right. The U.S used this new act as a way to gain more soldiers for World War 1 being that Puerto Ricans were considered “citizens” they were now drafted in the war.

In my eyes, its as if the people of Puerto Rico was being teased and that citizenship was being held over there head. I am embarrassed to know that I am apart of country that values the dollar over a life

By the island of Puerto Rico being territory of the U.S, this does not technically make them apart they just belong to. Puerto Rico does not receive any public assistance from the U.S or any healthcare benefits, but the U.S can build factories and trade from their island leaving them open to diseases and bad air/water. How can you dump waste onto a place you own, harming the people that you are responsible for with toxins and not make sure that they are healthy enough to endure those chemicals.

At this current moment Puerto Rico filed for bankruptcy in July 2017, and they are supposed to be one of the top for exporting pharmaceutical and medicine manufacturing. What makes Americans so superior to Puerto Ricans? The U.S is using Puerto Rico’s grounds to produce medicine and pharmaceuticals but can not supply the people of Puerto Rico with health insurance and assistance. This is a blatant slap in the face to the people of Puerto Rico being that they experienced a hurricane (Maria) in 2017 and ran out of electricity, clean water, food, and lost their homes but yet the chart above shows that we are still profiting off of them a whole year after we could not seem to find any extra money to help these displaced islanders.

One day we will get to the bottom of why the U.S constantly takes minorities land and space but refuses to deal with the actual people who were settled there. But we should probably not expect much of a direct answer being that America was built on the back of displacing minorities for power and profit.

I was a 17 year old high school student who did not watch the news, I would just roll over in the morning to my mom telling me “Janelle, its going to rain; Janelle its going to snow”. I never had to think hard about any extreme weather conditions or relocating of any kind because I live in a pretty sturdy building with bricks, the most troubling thing on my mind during extreme weather conditions were leggings or long-johns. September 17th, 2017 was a Sunday to remember in retrospect, I was very obnoxious that day when I heard about the storm that hit Puerto Rico. Not knowing the damage this Hurricane would later result to, as a teenager the only thing that ran through my mind was “Is the rain going to hit New York, so I can stay home tomorrow?” Till this day those words haunt me every time I go to my “Puerto Rico: After Maria” class and hear those who have family members in Puerto Rico directly effected by the storm. I live in predominately black neighborhood, so its not until I got to Hunter College when I started meeting people from different cultures and taking classes that taught me about them as well. Two semesters ago I took this Puerto Rican history class that basically gave me many examples of how the United States of America values what  Puerto Rico can offer rather than appreciating their people. Ever since then I have been taking interest in these courses because I feel like it is my job as someone who lives in America to educate myself on whats going in a country that even though Trump hates to admit, is apart of us! Now I’m in a class that focuses on the aftermath of Hurricane Maria and current day Puerto Rico. On the second anniversary of Hurricane Maria According to the New York Times article, “Hurricane Maria, 2 Years Later: ‘We Want Another Puerto Rico’” the citizens of Puerto Rico are still holding together assembly’s in the San Juan neighborhood, to discuss what they want their future to look like.

It is hard to believe that 2 years passed and the people of Puerto Rico are still without power, clean water, and food. Reading about to the conditions that Puerto Ricans are living in, makes me commend them for their logical ways of trying to get a reform by being patient while still advocating for themselves. Slowly but surely Puerto Ricans will get their island cleaned up completely and this will all be worth it. Some of them are even looking at this gap that is supposed to be filled with the U.S giving reparations and cleanup as something that was crucial and necessary.  Emilio Pantojas García, a sociology professor at the University of Puerto Rico states “What Maria did was very important in political terms: It showed that the government of Puerto Rico was the equivalent of a failed state; We survived Hurricane Maria because of solidarity among churches, community organizations, neighbors. The government never arrived.” This quote is relevant to the point of “it takes a village”, when the government and FEMA became useless the people of Puerto Rico stepped up to the plate they took matters into their own hands. 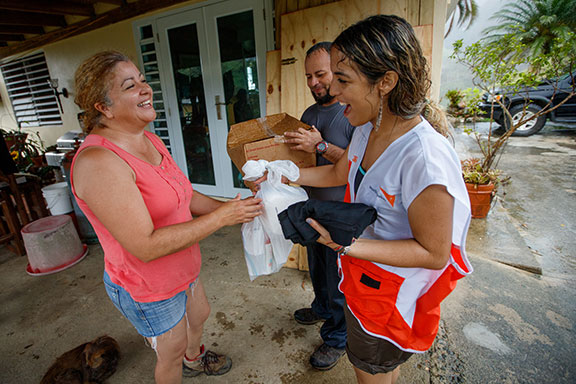 Not only are the people of Puerto Rico pitching in but so are celebrities and college students. Right after the Hurricane hit Marc Anthony alongside Jennifer Lopez, who is a six time Latin Grammy award winner started up a humanitarian relief initiative called “Somos Una Voz” (We Are One Voice) backed by an “alliance of celebrities working together to rush food shelter, medicine, power and communications to areas affected by recent natural disasters” in the wake of Hurricane Maria in Puerto Rico. Also, rapper Pitbull sent his private plane to Puerto Rico to transport cancer patients seeking chemotherapy treatment to the U.S mainland. In the New York Daily News, Pitbull humbly said “Thank God we’re blessed to help.Just doing my part” that statement should make a light-bulb go off in Trump’s head because it is actually Donald Trumps “part” to assist the people of Puerto Rico and to get them back on their feet being that Puerto Rico is territory of the United States.You even have CUNY students flying out during their summer break to help Puerto Rico rebuild, everyone is taking accountability except government officials.

Seeing people who are just like me pitch in to support gets me inspired to want to help as well. In my opinion, I think that as people who are not originated from Puerto Rico we should first start by educating ourselves and then looking for solutions or outlets to further support Puerto Rico. Just because our president holds Puerto Ricans in no regard does not mean we should too. Learning about Hurricane Maria helped me become more involved with supporting those in need. My mom is a teacher at a school in Bushwick, and we came up with the idea of making a safe space for not only the children but also the faculty who have families in Puerto Rico struggling to piece their homes back together. I always felt so guilty for being ignorant that Sunday morning after hearing about what was going on, and insensitive to what I could not see, but just because it was not around for me to see does not mean it did not happen or damage was not done, so I look at this as a way to redeem myself in a sense. Even though, these group members are not directly effected I still think its a step towards knocking down stereotypes and misconceptions about Puerto Ricans that are spread throughout white America. Just from hearing them speak about the benefits and assistance that is not afforded to them, tells me that the strain this Hurricane is putting on their loved ones are still bothering them 2 years later. I believe everyone has a story to tell, you just need someone willing to listen.